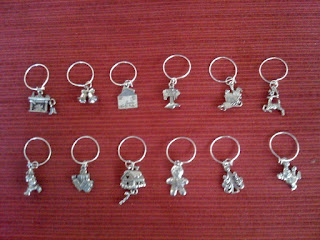 Whimsical Christmas beverage charms to help your guests fa-la-la-la-la with their own personal beverage! Charms can be found in silver or gold at craft and bead stores. These can easily be packaged in cellophane Lollipop bags. Shortening the bag may be necessary. You can make a custom topper for the bag with your own message and art, printed by computer, on card stock paper. Then just cut, fold, staple, and present!
Posted by Debbie Bolduc at 11:01 AM No comments: Links to this post

The Story of Christmas Beverage Charms 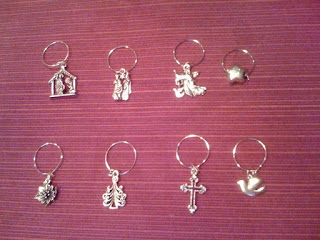 What better hostess gift or unique stocking stuffer than "The Story of Christmas" enfolded within these extraordinary beverage charms. Stimulate meaningful group conversation with the elements of the Christmas Story and what it means to you and your guests.

You can purchase earring hoops and charms, beads, and other embellishments at any craft or bead store, like Micheal's. It helps to have jewelry tools to bend the wires back. Slip the charm on, bend the end of the wire back to that it will lock in the other end of the hoop. There you have it!

Dr. Joel Poinsett, who was the first ambassador to Mexico, brought the bright red star-shaped flower to the United States. Hence, it was names as Poinsettia. It is also known as 'Flame Leaf' or 'Flower of the Holy Night'. The legend related to this favorite Christmas flower is Mexican too. However, there are two versions of the story. In one version, the two small children of the story are known as Maria and her little brother Pablo; while in another version, two cousins are mentioned by the names of Pepita and Pedro. Whatever be the names, the story goes like this:
There was once a brother-sister pair who was very poor. They lived in a village and they had barely enough to eat two full meals a day. As the Christmas time approached, festivities, parades and parties in the village attracted the children. The gaiety of the season in itself was quite charismatic. Moreover, a large manger scene was being set up in the village church and all the children were eager to go to Baby Jesus and give him the best present. Mario and Pablo also wanted to give expensive presents to the Holy Child that He will love. While all children were discussing, what they think is best for the baby and what they will buy as the gift for Him, Mario and Pablo knew that they had no money to buy the presents and had nothing that they could gift to the child.

Yet, they could not let go of the temptation to see the baby just once and give something to Him. On Christmas Eve, Maria and Pablo set out for church a little earlier than others to attend the service. Since they had nothing to give to the child, they thought of plucking some weeds that was growing along the roadside to make a soft bed for Baby Jesus and decorate his crib. While they were still decorating the crib of the Baby, other children also arrived. Now, children can be very cruel when it comes to teasing and making fun of others. Mario and Pablo were almost in tears for shame and helplessness when a miracle occurred. Suddenly, the weeds burst into bright red petals that looked like stars and were so beautiful that everyone was awed by their beauty. Everybody realized and said that a gift of love is dearer to Jesus than the most expensive presents that money could buy. Ever since then, Poinsettia flowers have become favorites for Christmas decorations
Posted by Debbie Bolduc at 7:06 AM No comments: Links to this post

The Best Photographer In Orange County!

Misty Matz's work is INCREDIBLE. Check her blog at mistyphoto.com
Posted by Debbie Bolduc at 5:52 AM No comments: Links to this post

Gift Wrapping Embellishments (To Be Continued) 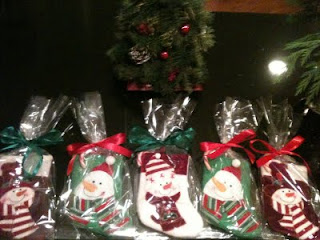 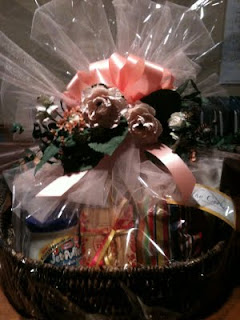 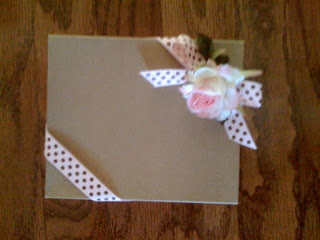 Here's a fun way to dress up gift cards! These snowmen stockings were located at Michael's for about $4 each. :-)
The gift basket was constructed with a floral spray. A few of us added gifts and it needed to be wrapped quickly. Our recipient was very pleased with the exterior and the interior. ;-)

When you have a friend that likes brown, but also enjoys femininity, this wrapping of a box works nicely.

I just purchased Carolyne Roehm's book, Presentations, A Passion for Gift Wrapping, which gives you LOTS of CLASSY ideas for wrapping gifts so that your recipient feels special. I have almost every book this woman has ever written. Most of her books start with the title, "A Passion For". She has a lot of the same "passions" I do.
Posted by Debbie Bolduc at 9:05 AM No comments: Links to this post

Something Personal Men Will Actually Use 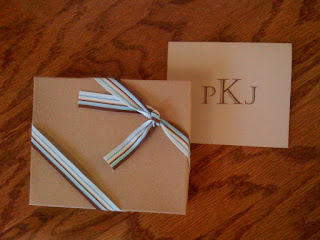 This gift is very masculine and something most men won't buy for themselves. You can use your computer to customize his three initials (the last name initial usually is placed in the middle). I like to place a writing pen that matches the color of the print in the box because there is just enough room. Boxes of all types can be purchased at container and packing stores, or online. Wrap with a masculine embellishment I like to ad a Fleur-de-lis, a button with an emblem, or some other manly symbol as a general rule. My husband and son USE the ones I made for them. :-)
Posted by Debbie Bolduc at 9:04 AM No comments: Links to this post 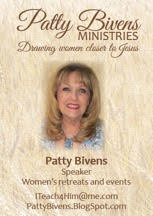 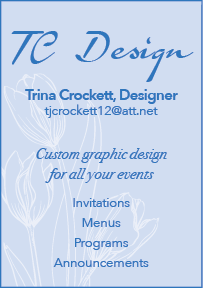